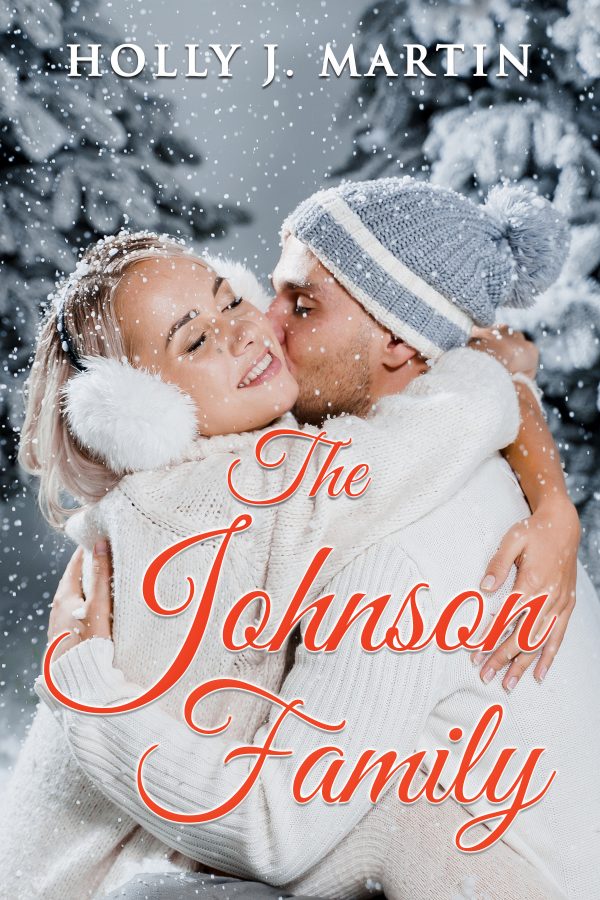 The Johnson Family boxset is a heartwarming, achingly human compilation of each book in the series from Holly J. Martin, author of the acclaimed Johnson Family series – she introduces us to compelling characters that readers have said: “…you can’t help but fall in love with.”

Collected together for the very first time, this steamy romance collection includes all 10 books in the acclaimed Johnson Family series.

Princess:  He was the only person she trusted. Now, she can’t even trust herself.

After escaping from an abusive halfway house, “Jack” Elsie Johnson forges her own path forward as a successful model, determined to forget about the town of Harmony, Maine, her family – and the pain of knowing their betrayal almost cost her her life.

Harmony:  She’s a romantic. He’s a die-hard bachelor. They need to deal with their attraction before both of their jobs go up in flames.

MacKenzie has been in love with Davey Johnson ever since she was seventeen. Davey on the other hand, doesn’t believe in pursuing the kind of passionate love that could make everything go up in flames. Will the romantic chef and the cautious restaurant owner find a way to make things work, or is this flirtation bound to fizzle before it can sizzle?

Heaven:  They claim to be fiercely independent… and end up enjoying each other’s company every chance they get. Who’s fooling whom?

When Zena Jones isn’t working as a tattoo artist, she’s reluctantly exploring New York with her best friend. That’s how they end up in Heaven, one of the city’s most exclusive S&M clubs. Zena nearly regrets entering—until she meets Marcus, a mysterious stranger who convinces her to unleash her hidden desires for just one night. With him.

Sweet Love:  Ty Johnson lives his new life in the shadow of his old one: the one where he was a professional baseball player and called up to the Major Leagues before a collision cost him his career and his fiancée. A family errand leads him to a bakery called Sweet Love, where the manager, Riley, is as tempting as her cupcakes are delicious.

Forgiven:  A new start in a new country… right next to the one person neither of them ever thought they’d see again.

The moment the plane touches down, Dr. Ava Knight comes face-to-face with Bobby Johnson. Sexy playboy, ER surgeon, and former classmate at her college, Bobby is the first man who truly broke her heart—and now they both work for the same company.

Brilliant Captive:  For Dr. Theodore “Teddy” Johnson genome sequencing is child’s play compared to unlocking the enigma of Emma’s heart. Layer by layer, he begins peeling back the barriers built up over a lifetime of isolation and anxiety – the result of Emma’s terrifying childhood growing up in a sinister ‘school for the gifted.’ However, just as Teddy begins to forge the first real connection of Emma’s life, the gut-wrenching past she thought she’d escaped suddenly comes back to haunt her.

Stolen Valor:  All her life, elite Delta Force operative Kate Wilder had played by the rules – including the one that forbid her from following through on the scalding hot chemistry she had with her commanding officer, Captain Mason “Bear” Johnson.

But rules are like people – all too easy to break.

Captured, tortured, and broken, Kate was left mentally and physically shattered – and while Bear and his team were able to bring her home, Kate’s friends and family were left wondering if she’d ever be whole again.

The Wiseguy’s Daughter:  Lilly doesn’t have long-term relationships. It’s a cost of being the on-call corporate attorney for an exclusive business client in the NY metro area. When she goes to a yoga retreat and immediately hits it off with Garrett, a magazine owner who ought to be its cover model, she knows she’s in deep, deep trouble.

Because “Lilly” is actually Michaela O’Toole, only daughter of the head of the Irish mob in New York City.

Telling Garrett the truth might cost her their happiness. Unfortunately, you can’t keep secrets from a crime family, and Michaela must make a terrible choice to protect the man she loves…

Henry’s Law:  Sofia Garcia has made a devil’s bargain. She’s left her life and teaching job in Colombia behind to run a smuggling errand across the U.S.-Canadian border. In exchange, the local cartel will spare her brother’s life. Unfortunately, the operation goes sideways, and Sofia lands in jail. Her court-appointed attorney, Henry Johnson, unexpectedly bails her out and offers her an unusual proposal: marry him and live in Maine until the case goes to trial or it’s safe for her to return home. Out of options and terrified of the cartel’s reach, Sofia agrees.

Caleb’s Fight:  Veterinarian Ashley Walker has turned around her small Bronx animal clinic: she doesn’t bow to the extortion that used to bleed it dry, and she doesn’t give up on her furry patients. When an urgent house call leads Ashley to Caleb Johnson’s doorstep and her body responds like it just figured out what “desire” is, the control she’s had over her carefully planned life shatters.

Ashley knows Caleb is wrong for her. He’s too handsome, too charming, and he once fought in the underground circuit. He’s exactly the kind of person she’s been running away from her whole life.

But after Caleb intervenes in a dispute with the gang leader who has it in for Ashley, disentangling her life from his turns into a dangerous game. What’s worse, she’s not even sure she’s sorry…

Each book in this sexy-as-sin collection can read as standalones. No cliffhangers. HEA guaranteed!